This article appears in the Huffington Post on the 21st May 2015. 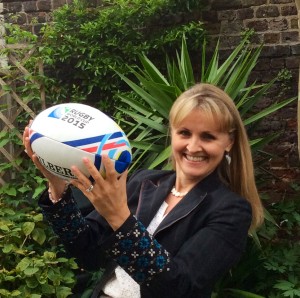 I always love creating unique combinations. Whether it’s in my cooking (I’ve cookbooks from every country ever visited) or my wild wardrobe. I also mix my home décor with the old and the new. I love being individual.

My father married an Austrian lady in 1955 in London. It was an unusual and brave step then. I remember my mother feeling ostracised because of her nationality.

Maybe that innate urge to bring people together from different cultures led me to create these community singing workshops for the Rugby World Cup 2015 entitled ‘Celebrating Songs of the Nations’. I have to say, they are not rugby songs as you know em. Let’s promote friendship and understanding between nations instead of warring with the other. As in the words of the wonderful Ella Fitzgerald, “The only thing better than singing is more singing”.

Visitors to the UK, spectators and local residents will have the opportunity to learn songs from each of the 20 countries taking part in the Rugby World Cup this October. This forms part of a three-week Music and Drama Festival in Richmond upon Thames which includes Twickenham stadium, the home of England rugby. Each country will have a voice equal to the others. How many of us can hum a tune from Fiji, Tonga or Namibia? What better way to learn about the various countries than through song. The poetry, text, rhythmic meter, melody and the harmony are all rather unique.

These community based singing workshops will reach a diverse range of people. Not only musical followers but also sporting and travel aficionados. While you munch your breakfast cereal this morning, spare a thought for the chap who invented Cornflakes. In 1931, Mr Kellogg said “Singing promotes health, breathing, circulation and digestion.”

It’s interesting to note, there are more choirs in the UK than fish and chip shops. Singing with other people improves our physical and mental health. Research carried out by specialists at the Journal of Applied Arts & Health, found half-a-dozen ways in which singing helps our mental health. This includes improving our cognitive function to social confidence. The benefits are endless.

Respiratory consultant Dr Nicholas Hopkinson at the Royal Brompton Hospital in London, admits “Patients who sing are breathing more slowly from their diaphragms rather than upper chest. This is beneficial in conditions like emphysema and pulmonary fibrosis.” I’ve had the privilege of running a singing workshop at this hospital, showing the doctors how to sing along to Abba’s “I have a Dream”.

Some truly astonishing research by Frankfurt University a few years ago, found that after rehearsals of Mozart’s Requiem by a local choir, saliva taken from the singers, found increased secretion of antibodies! Studies have shown how it reduces the chance for bacteria to dwell in the upper respiratory tract, thus preventing colds and flu, especially in the colder months.

Not Rugby Songs as you know em

If we know singing is good for us, come and join us in October.

More details are found on the council’s festival here http://www.richmond.gov.uk/music_and_drama_festival.

Helen Astrid has been awarded a ‘Civic Pride Fund’ by Richmond-upon-Thames Council.

The workshops are held on Thursday 1st, 8th and 15th of October, 2015 from 1645 to 1815. Doors open at 1630.
Helen Astrid is a graduate of the Royal Academy of Music in London. As an opera singer, she has performed at some of the major venues in the UK, including English National Opera, Garsington Festival Opera and the South Bank. She also appeared in the West End hit musical ‘Phantom of the Opera’. She appears on radio and TV as an expert in singing and the voice and her book ‘Singing tips at your fingertips’, is available on Amazon.