This article appears in the Huffington Post on 1 December 2014. 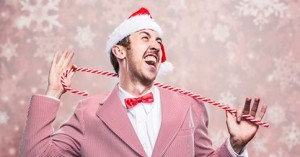 What will you do for tuppence? (about three U.S. cents). Not a lot I imagine. Forty years ago, that was a nice bit of pocket-money. It was my first wage as a singer. At 6 years of age, I was dared to sing a solo. I sang O Little Town of Bethlehem at a Christmas party in front of hundreds of children. I earn my prize. I’m hooked! Now, when I hear the carol, I’m tearful. So why does Christmas bring out the singer in us? For me, it’s about the joy and innocence which once was and now is gone.

Christmas brings people together. Seeing friends and fitting everything in before it’s too late. But why sing? It certainly makes us feel whole, even if we’re no good at it. Research tells us singing makes us feel good. The knock-on effects on our lives is drastically improved*. The festive season gives us permission to let go. After all, we have a myriad of other indulgences. So, why not sing!

There’s no doubt that this time of year offers opportunities to stretch our vocal prowess. We can sing in church, join in a few impromptu carols at the local train station or yodel along to Julie Andrews on Christmas Day (after a few glasses of port of course). It’s almost impossible to avoid the strains of festive songs as we shop in the supermarket or take public transport.

During December, many concerts take place more than any other time of year. People have extra singing lessons because they want to be ‘note perfect’ when they surprise the boss at the office bash with a rendition of The Pogues Fairytale of New York. Hopefully the P45 isn’t on their desk the next morning!

Irving Berlin churns them out

One favourite of mine is White Christmas by the prolific songwriter Irving Berlin. He wrote it for his first wife (who sadly died on their honeymoon). It’s melancholic when you hear it. A sense of something lost rather than gained. It’s also the biggest-selling Christmas song of all time. It’s estimated to have sold 350 million copies. I’ll be surprised if you don’t sing along. Berlin did churn out some fantastic and heartfelt songs.

If you prefer something traditional, there are countless carols. In the United Kingdom, our tradition goes back to the Middle Ages. Beggars seeking food, money, or drink, would wander the streets and sing holiday songs. Some carols are drinking songs known as ‘Wassailing songs’. A hot bowl of mulled cider would be shared by all festive carolers keeping them warm. Others have a typical dance-like character making them ideal for outdoors. One example is As Joseph was a-Walking. Of the European countries, Germany has a strong tradition of carols that stem from a folk element which went back to the Church. Such as Stille Nacht, Heilige Nacht  (Silent Night, Holy Night). This carol reflects the tradition of cradle-rocking. It’s quite divine and both children and grannies love it! This is what’s fantastic about music. It breaks down barriers and is available to everyone.

Which songs are your favourite? We’re spoilt for choice really. Give yourself permission to let the singer in you come out. It’s a form of therapy and we certainly need it during this festive frenzy.