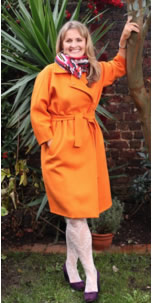 You might think happiness is some sort of goal to be attained, but more often than not it’s within you, and just needs to be released. Three people tell Psychologies how they discovered what makes them happy, and how they’re not on a mission to help others to do the same….

“Singing lets you get in touch with that childlike, playful side of your nature”

Helen Astrid is a singing coach and author

‘My father was into amateur dramatics and often listened to opera. When I was five or six, I was able to imitate middle-aged sopranos and make a big sound. Inside our caravan on holiday, my parents were often scared I’d shatter the windows!

From there, my interest in singing grew, partly I did it for escapism. My father was a strict disciplinarian, being in the police force. So at 13, I begged for singing lessons. By then I really wanted to be singing Elvis Presley songs. Instead, I was made to follow the classical route.

I got on a six-year training course at the Royal Academy of Music, and my vision was to be a famous singer. But in the fist year, I started to teach singing to support myself and I loved it. I realised I was good at it – people kept coming back. After I finished my training, I carried on teaching alongside performing. I also developed my methods to work in the corporate world teaching groups of people to sing.

People often shy away from trying something like singing, because they fear that they’ll look stupid or not be especially good at it. We are such high-achievers that we often feel we can’t possibly fail, so we cut off a chance at happiness. When people are hesitant, I tell them to think of it as inhabiting another character when they sing; a different role. One woman enjoyed it so much she said it helped her succeed at a job interview – she imaged she was playing a role.

Singing is not only physical – you’re taking in more oxygen, getting blood circulating and producing endorphins – bit it also stimulates a different part of the brain. It allows you to express your innate self, and in that way it’s primal, and it’s also getting in touch with that childlike, playful side of your nature. Feedback I get from people who take my workshops is that they feel so much better afterwards. I often hear: ‘I went home with a spring in my step.’ You get the opportunity to sing song you may not have heard since you were a child or a teenager; it gives you permission to revisit that lost part of yourself. We do a wide range of workshops – Abba’s Dancing Queen is always a big favourite!”

News from me to you!